A Word About Our Patron 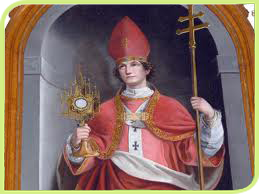 Norbert was born in the year 1080 at Xanten in Germany. His father Heribet belonged to a royal family and was a well known figure all overt Europe as Count of Gennep. His mother Hedwig was a member of a famous aristocratic family. Thus, both parents of Norbert were of nobility. Norbert's elder brother was named Heribert after his father and both the Heriberts held the title 'court of Gennep' and lived in the castle of Gennep, ruins of which can be seen even today. Norbert had a younger brother Eribert who was killed in a battle. Norbert is known by three names: Norbert of Gennep because of his Father's title' Norbert of Xanten, Xanten being the town where he grew up and had early education. Simultaneously he is also known as Norbert of Magdeburg because he became the archbishop of that place.

By a miracle God changed the worldly young Norbert into a second St. Paul. St. Norbert lived a time when there was a sequence of crisis in the church. He knew that cause of the crisis was spiritual rather than social or political. An important step he took to solve this problem was to introduce reform among the clergy. He founded a number of spiritual centres for the formation of the pastoral clergy. According to him priests who are not spiritual; cannot be good pastors, for one cannot have zeal for others soul unless he has zeal for his own soul. Therefore he insisted that pastors must be men of prayer and action. To achieve this goal Norbert combined contemplative life with the active, which is known as vita mixta, for his canons. He taught his disciples that one could never be truly active unless he first derived spiritual strength from God through prayer.

To realize this he founded the praemostratensian Order combining contemplation with action.

He went forth preaching penance by word and example. He stoutly defended the faith and the Church when attacked by enemies of any kind. He preached the Gospel untiringly and established peace where there was strife. His peace efforts won him the titles of 'the Angel of Peace' and 'the Apostle of Peace'. His victory over the Sacrementarian heresy won for him yet another title, 'the Apostle of the Most Blessed Sacrament'.

His power as an orator has been highly extolled by numerous contemporaries. In spite of the fact that he was constantly occupied in preaching, founding religious houses and later in the administration of his diocese, he wrote several book but unfortunately most of them were lost during the protestant Revolution and at great fire at Magdeburg in 1631. Although he was a prolific writer, Norbert was more a man of action and was to live the life of Jesus Christ, which he did and that made him a saint par excellence. Norbert had been always revered as a defender of the church and a great preacher. The Norbertine fathers (Order) all over the world follow the Rules given by him. Therefore we choose him as a patron of our school. He is remembered of June 6th.